New book out: Sinews of Empire: Networks in the Roman Near East and Beyond 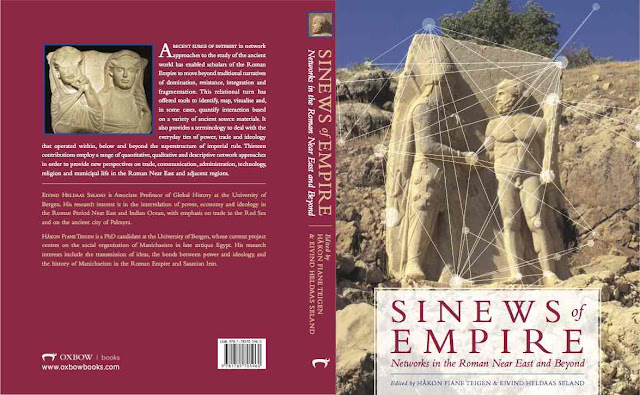 Our project is inevitably coming to an end, but we'll still have results to present for some time to come. Just today we sent our edited volume Sinews of Empire: Networks in the Roman Near East and Beyond to the press. It is already available for preorder at a special pre-publication price at Oxbow Books.

Below is the cover-text and table of contents:

A recent surge of interest in network approaches to the study of the ancient world has enabled scholars of the Roman Empire to move beyond traditional narratives of domination, resistance, integration and fragmentation. This relational turn has offered tools to identify, map, visualise and, in some cases, quantify interaction based on a variety of ancient source materials. It also provides a terminology to deal with the everyday ties of power, trade and ideology that operated within, below and beyond the superstructure of imperial rule. Thirteen contributions employ a range of quantitative, qualitative and descriptive network approaches in order to provide new perspectives on trade, communication, administration, technology, religion and municipal life in the Roman Near East and adjacent regions.

Sinews of belief, anchors of devotion: the cult of Zeus Kasios in the Mediterranean
Anna Collar

Sinews of the other empire: The Parthian Great King’s rule over vassal kingdoms
Leonardo Gregoratti

Networking beyond death: Priests and their family networks in Palmyra explored through the funerary sculpture
Rubina Raja

Businessmen and local elites in the Lycos valley
Kerstin Droß-Krüpe