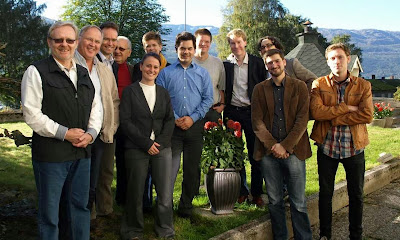 Last week saw the first research meeting of the NeRoNE project at Voss near Bergen. 12 scholars from 10 universities came together in order to discuss how we can approach the ancient world in general and the Roman Near East in particular in terms of networks. The speakers came from different traditions and disciplines, but all based their discussions on empirical case-studies. This proved to be a constructive way to foster discussion on how different approaches can highlight different aspects of network interaction. Below I summarize the proceedings. Please mind that this is my interpretation of the papers delivered, and that the authors might not agree with it.

As host, I started myself, introducing the NeRoNE project, and outlining how I believe that the methodological and theoretical frameworks from Social Network Analysis and New Institutional economics can be combined in order to help us map, explain and maybe even to some extent measure the importance of everyday interaction in the Roman Near East and other traditional societies.

Terje Stordalen, University of Oslo, followed up with a paper on Mapping potential ancient Near Eastern associations with Latour and Bourdieu. Terje’s presentation used the example of mass-produced Roman period clay figurines from Egypt, in order to show how networks are continuously reproduced by often unintended and unconscious practice. Imperial networks, for instance, might be said to be reproduced by the usage of roads, currency etc., without actors being consciously aware of this, but we also find example of anti-imperial practices, revealing alternative networks.

Next up was Tom Brughmans, Southampton University, with a paper called From network pattern to network process: exploring tableware distribution networks in the Roman East, 150BC-200AD. Tom, who is a part of the Connected Past group, and at the forefront of archaeological network science, followed the process from data via theory and methodology to results and interpretation. To me, this highlighted the point that theory is there mainly because it can help you with your material and your research questions, but that it is also necessary to be explicit on your use of theory, because there are always theoretical assumptions underlying your work.

Kerstin Droß-Krüpe, Phillips University Marburg, gave a talk on Regional mobility and private good exchange - an interpretative attempt within the framework of agency theory. Kerstin’s talk gave a wonderful insight into everyday life in Roman Period Egypt, showing how ties of trust can be established between people with different kinds of relationship and thus contributing towards our understanding of how the ties connecting different parts of a network are constituted.

Michał Gawlikowski, recently retired from Warsaw University after more than four decades of research on the Roman Near East in general and the city of Palmyra in particular, then gave a talk on The Syrian Connection. Palmyra as the hub of the Syrian Foreign Trade. Here he argued that Palmyra was not only a node in a transit trade between Indian Ocean and Mediterranean, but primarily served demand for Eastern textiles and spices in the regional market. For me this came as a useful reminder that the Near East was not only a contact zone between east and west, but can also be seen as a system in itself, perhaps approachable as a small world, following the lead of Irad Malkins recent book on archaic period Greek networks in the Mediterranean.

The next speaker was Ted Kaizer from Durham University. His paper was about Lucian on the temple at Heliopolis. Ted showed how Lucian’s The Syrian Goddess, gives a narrative map of the Near East, where Roman Imperial presence is downplayed, while indigenous and local traditions are emphasised. Arguably, this is an example of the anti-imperial or at the very least non-imperial practices that Terje’s talk had mentioned, showing how underneath the superstructure of Roman rule, alternative networks continued to exist and reproduce.

Oystein LaBianca from Andrews University continued along the same line with Jordan in Global History: The View from Tall Hisban and the Madaba Plains, Jordan. Four decades of archaeology at the site of Hisban have revealed how changing imperial networks have formed life, subsistence and material culture at a site in present day-Jordan. Oystein’s talk called attention to how imperial “Great traditions” and local “Little traditions” meet, co-exist and interact.

Leonardo Gregoratti, Durham University, followed up on this with Palmyra and Emesa or "Palmyre sans Emese", showing how contact between places should not be taken as evidence of interdependence, and how trajectories of imperial rule and long distance commerce not always follow the same patterns as those of everyday connectivity.

Michael Sommer, Oldenburg University, returned attention to Social Network Analysis with a paper on Networking the frontier. Roman soldiers and veterans in the Near East. Here he argued that Roman army veterans settling in border areas after service formed a dense local elite network that was closely affiliated with imperial culture, but also connected to local society. Michael’s paper, to me, was a good example of how it is possible to study the relation between networks on different levels.

In her paper The Palmyrene presence in Egypt, Katia Schörle, University of Oxford addressed the presence of people from Palmyra, Syria in Egypt. Generally viewed as a product of the situation on the border between the Roman and Sasanian empires and of Palmyrene territorial expansion into Egypt in the third quarter of the third century, Katia made a strong case for vertical as well as horizontal integration of Palmyrene commercial activities being factors behind Palmyrene activities in Egypt and the Red Sea.

The last paper was by Håkon Steinar Fiane Teigen, who will shortly join the NeRoNE project with his PhD project. A web of missionaries. Dynamics of religious networks in the Middle East in Late Antiquity. Håkon’s project uses the case of Manichaean communities in the Near East in general and in Egypt in particular to investigate the role of religious networks in Late Antiquity. The project clearly has potential for understanding the role of minority groups and for addressing the relationship between local, regional and empire-level networks.  I’ll ask Håkon to write a blog entry about his project as soon as he joins us in Bergen, which I hope will be soon.

To my delight, although not surprise, presentations with quite different points of departure came together very nicely. Just for the fun of it, I've made these two visualizations of their relationship based on the content keywords of network analysis, cohesion, trade, mobility, ideology, tradition, regionality and imperialism. The first is represented as a two-mode network, the second as a one-mode network. 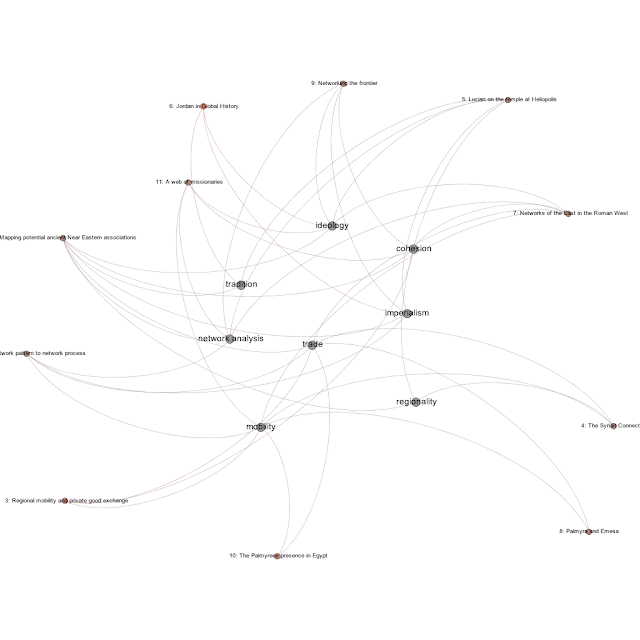 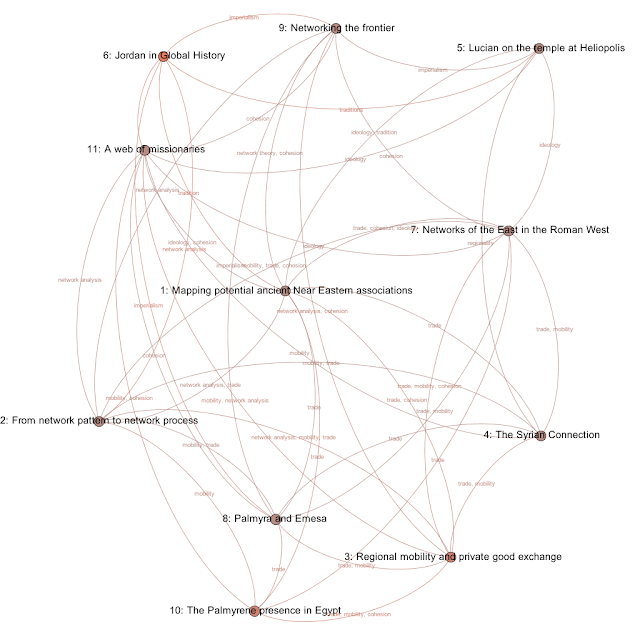 Ideology can also be approached from a network perspective. Rulers of the past carefully constructed legitimacy by linking up to existing ideological currents. This is the topic when Dr. Miklos Sarkozy visits the research group Ancient history, culture and religion and the NeRoNE project, in order to give a talk on 'Heterodoxy and Orthodoxy in Sasanian Imperial Ideology: Achaemenid, Avestan, Parthian, Antique and Judeo-Christian elements of the Sasanian Legitimacy '. Dr. Sarkozy is Associate Professor at Karoli Gaspar University of the Hungarian Reformed Church, and currently a research fellow at the Institute of Ismaili Studies, London. He has published widely on Iranian history and philology, and is also contributor to the Encylopedia Iranica.